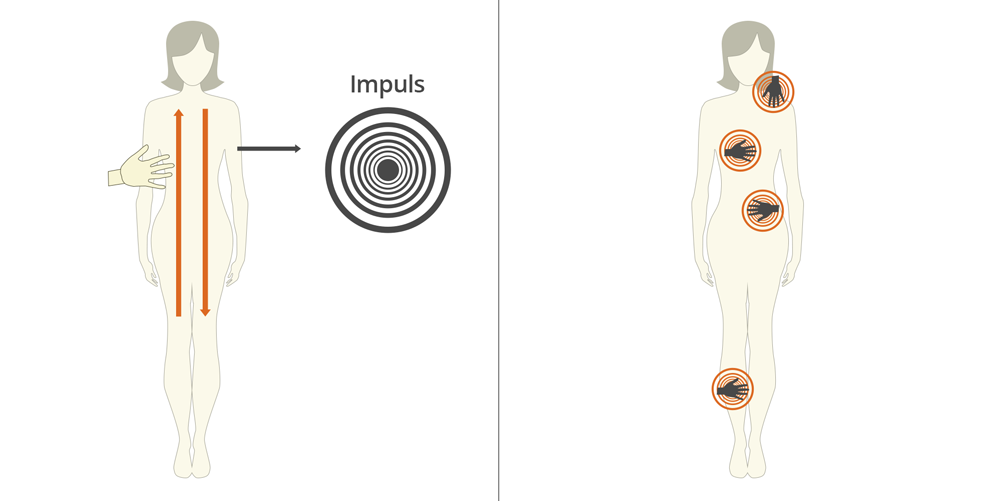 Since the soul is body, and the body is soul, as aptly expressed an axiom from C.G. Jung, the emotional pain is stored in the body (and brain structures). So they can only be released there. The split-off parts of the soul can only be integrated in the body, not outside of it. The emotional pain is stored deep in the tissue, and often protected by strong muscle armor (the approach of Wilhelm Reich).

Theory and history of the method:

The building of the muscle armor and its exact function in the body segments was already observed by the Freudian Wilhelm Reich in the interwar period.  He developed a corresponding approach of body work (based on his character analysis of each type). Alexander Lowen and especially Gerda Boysen tied up to his work. The latter dealt with the soft tissue in which the Traumas from the pre- verbal phase remain stored, i.e. mainly from the pre – peri and postnatal period. Gerda Boyesen, therefore, had significantly expanded the approach of Wilhelm Reich in the 60 – 70 of last century.

A crucial theoretical work comes from Arthur Yanov by describing the early imprints, published in the 80ies. It is the same pre-verbal phase, well seen from a neurological perspective, which opened up more than a complementary view of this phase and its importance in later life.

The Czechoslovak – American psychiatrist Stan Grof, who comes from the theory from C.G. Jung and his theory of archetypes, had – again based on the perinatal period – developed his model of four BPM (basic perinatal matrices ). This model reflects those 4 phases of birth which the child at birth is going through again and which can cause typical traumatic moments.

Practical application of the method:

So the physical impulse must exactly reach that depth in which the solidified pain is stored in the tissues. Just like this the solidified load of fear, pain, helplessness etc. can be released again. The so for years blocked vital force can begin to flow again.

Advantage of the method:

If the pain keeps stored in the tissue, it is only a matter of time until it comes to somatization in the form of various pains and diseases. The so-called „non-invasive methods” are well intentioned, but in the long run they are more likely to cause unintentionally its somatization that automatically adjusts itself over time by avoiding the release of pain in the body.

This website uses cookies to improve your experience while you navigate through the website. Out of these, the cookies that are categorized as necessary are stored on your browser as they are essential for the working of basic functionalities of the website. We also use third-party cookies that help us analyze and understand how you use this website. These cookies will be stored in your browser only with your consent. You also have the option to opt-out of these cookies. But opting out of some of these cookies may affect your browsing experience.
Necessary Always Enabled

Any cookies that may not be particularly necessary for the website to function and is used specifically to collect user personal data via analytics, ads, other embedded contents are termed as non-necessary cookies. It is mandatory to procure user consent prior to running these cookies on your website.