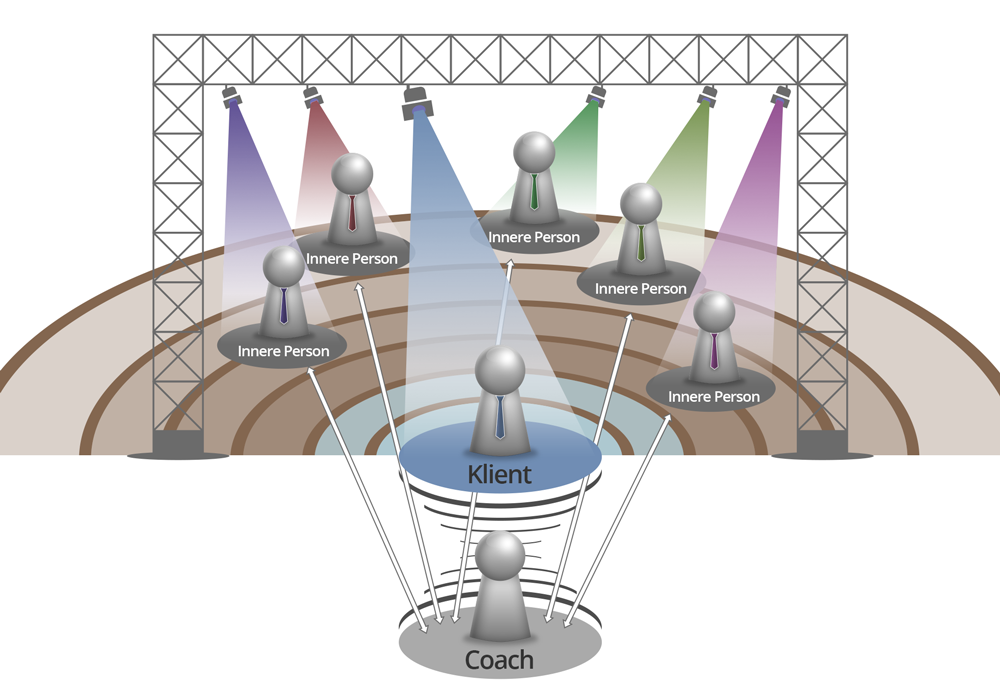 Over time, the unconscious existential attitudes become an even more autonomous character within the human soul. One can also talk about sub-personalities (Pierre Janet). By being externalized in the context of the method, there is a possibility of a dialogical interchange between the companion and the existential attitudes of the clients that come up from the unconscious, by giving them a “voice” and a place. In the course of dialogical interchange they become more and more aware and therefore start to transform themselves.

Practical application of the method:

The methodological steps of externalization, which were discovered and developed by Hall and Sidra Stone, seem simple at first glance: the companion asks the client to find that place in space where his inside person stands. Sometimes the client finds this place readily intuitive himself, but you cannot rely on it in all cases. As camouflage and deception is the motto of some powerful inner voices. It requires quite a sophisticated energetic feeling on the part of the companion to locate and speak to such a powerful inner voice that is bound to invisible spheres of the soul.

Since the client is entirely dependent on the skill of the companion, on its ability to dialogic coexistence. However, the dialogical coexistence is not only a verbal matter. Quite the contrary. The dialogic coexistence takes place on five channels of communication: verbal channel, energetic channel, emotional channel, physical channel and symbolical- pictorial channel. The totality of these wavelengths makes the effect, in which the inner voice of people feels addressed or not. This also demands a great deal on the companion: he wants to get involved with the motto of equality on the dialogical coexistence with the interior voices of clients, he has to be on all five communication channels permeable, agile, flexible and responsive. This is, apart from the work with his interior parts, the second important requirement.

As simple as the methodology appears at first glance, so difficult are their requirements: without basic work with his own inner parts one is hardly able to apply the method, since one has to become the method itself. Only then it unfolds its direct effect.

Advantage of the method:

The advantage over the classical coaching – and therapy forms consists mainly in the accuracy and effectiveness which derives from the fact that the unconscious attitudes are externalized as voices and therefore an immediate dialogue arises. If one only works with the (supposedly autonomous) “adult awareness” of the client, you do not actually to whom you are talking to. Voice – Dialogue as dialogic coexistence is in its essence the externalization of this sub-personalities (or inner voices). It is a dialogic interaction for which a relationship framework is created.

An individual approach of working with the unconscious existential attitudes that are foundation of important life trends and decisions.

Theory and history of the method:

The (trans generational) existential borderline experiences, and imprints that derive from condense into unconscious existential attitudes that codetermine both the relationship level (be it private relations or labor relations) as the content level of work processes and decisions in this regard.
(Talking with C.G. Jung it is about power-complexes). These unconscious attitude are focused on survival.  So its logic of decision taking or not acting follows an appropriate logic of survival, no independent, proper logic, especially since the people are hardly aware of this. However, these unconscious existential attitudes become visible in their consequences for a skilled observer.