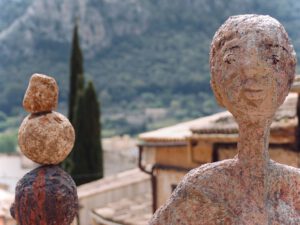 Because the way to happiness
leads directly through the muscular armour.

An impulse by Alexander Nchuchuma Riechers

A lot happens on the way to happiness, because nothing is more constant than change. And so, come what may, life always has new tasks in store. This is probably also the banal reason why happiness can so often and successfully hide from us. The striving wander busy forward – and where there is no luck, there is not necessarily unhappiness. Those who seek Fortuna have a long breath and a thick skin. But it is precisely these qualities that often stand in the way of happiness unnoticed.

Friend and foe of happiness – the autonomic nervous system

Because behind them works powerfully and quietly by far the most reliable friend and foe of all unsuspecting soldiers of fortune – the autonomic nervous system. It derives its power from its autonomy. We are not asked for permission whether our heart should beat, whether we may breathe or digest. Sympathetic and parasympathetic nervous systems, these functions run on autopilot – throughout our lives. And that is a good thing. The long breath and with it the gift of life, they are secured. But we are also not asked how intensively we are allowed to perceive and feel ourselves and our environment.

Both the blows of life and the everyday challenges are parried without our doing and in no time at all: Fight, flight or freeze. Even an average workday is peppered with these three archaic reactions. Snorting bosses, speechless co-workers, threatening customers, colleagues paralyzed with fear, fearing to lose their job, reputation or position. The threshold of threat to our nervous system is much lower than our proud consciousness would like to perceive. Or rather, can perceive. This is because the three musketeers of the nervous system have a common denominator: nonfeeling. In a threatening situation, the bulkheads are battened down. Feeling is replaced by functioning, because now only one thing matters: to get out of the situation physically or emotionally as unharmed as possible.

And so our nervous system constantly turns the wheel of life. Quietly and secretly as an autopilot of pain avoidance. Nonfeeling quickly becomes our second skin and begins early and in small ways. Then, when we are not allowed to live out our desires as children, when we are reprimanded as adolescents, when we learn to conform to social images and rules as young adults – nolens volens and more often than we would like, we have to suppress feelings such as anger, fear, sadness and even our childlike joy. To be calm, to be neat, to be decent, to be kind and to be eternally good and strong – from this often come pretty biographies, with a tortured smile. Because suppressing life itself is sometimes the worst punch, and the desire for “real” life like a thorn in the flesh.

Our soul learns to deal with it. The pain is split apart and moves “down”, into the unconscious. Here, those unconscious subpersonalities are at work whose suppressed longing becomes the motor of projections and thus influences our destinies in a shadow-hidden way – the Inner shapes, whose force we notice at the latest when our own will goes to pieces: we do things that we actually do not want or should not do. Because split apart does not mean gone, but at best not visible. Just as little as the fear. Just because we no longer feel it does not mean that it has disappeared.

It also migrates downward, into the soft tissue under the skin. From the frozen fear, an equally rigid muscular armor forms there, enveloping the entire body. The flood basin for all suppressed feelings and the result of a grandiose pact of body, mind and soul: the old pain should stay down and no new one should come in. The “trick” with which this succeeds is simple as well as ingenious and is described by the discoverer of the muscular armor, the doctor Wilhelm Reich, already in 1933 like this:

“Muscular rigidity can replace the vegetative fear reaction; in other words, the same stimulus that flees into the interior in startle paralysis forms a peripheral armor of the organism from the musculature in startle paralysis.” (Reich, Character Analysis; in Reich 2010, p. 456 f.)

That is, the muscular armor transforms fear into muscular permanent tension. This does not abolish it, but defuses it for the time being. And once in place, this protective shield naturally wards off life’s future blows. So the proverbial thick skin is more than real. And unfortunately, it also puts happiness at risk. Because fear no longer hangs proverbially only on our necks, but also in our backs, shoulders, legs, arms, glutes, chests, jaws and many other places. Very little comes through here anymore – both from the evil world and from the beautiful world.

A rigid muscle is hard against everything – especially against itself

A rigid muscle is hard against everything – the rough and rugged as well as the tender and pleasing. And especially against itself. We also feel this mentally, in rigid patterns and rigid views.Body and soul are, after all, a unity and the “character and muscular armor functionally identical” (Reich 2010, p. 465). A unity that, because of its armor, consumes energy even when at rest, becomes stiffer and more tense over time, and loses smoothness, agility, and grace. What is still completely natural for children is therefore often almost impossible for adults – swinging freely, breathing deeply, sleeping peacefully. The three magic ingredients to be able to feel the gift of life as happiness in abundance.

If you want to go ahead, you have to go deeper!

The way to happiness therefore needs for many of us first a backward roll – through the muscular armor. The goal, therefore, in all seriousness, is ” Always stay well relaxed!” And for that, our bodies need our help. For as Reich rightly states, “The armored organism is incapable of dissolving its armor [itself].” (ibid., p. 481) The strategy for doing this follows two strands: first, to let the rigid muscles, stuck fascia, and tough tissue loosen up again and become supple. That means to dedicate oneself intensively to the body (e.g. with the exercises of the biodynamics of Reich’s student Alexander Lowen). On the other hand, transforming the fear thus released into courage and confidence. This means exploring the unconscious and releasing the mental tensions. So if you really want to go ahead, you have to go deeper. The muscular armor is a good start for this. 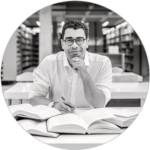 Alexander Nchuchuma Riechers, M.A. of philosophy, coach and author for personality development. At the center of his work is the Systemic of Inner Shapes – an approach that works directly in the unconscious with innovative methods. His goal: free-flowing vital force.